In this movie, Abhinay Berde appeared as a Young Anurag who is played by Ankush Chaudhari as an Elder Anurag. 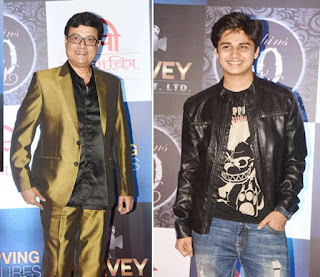 After the success of Ti Saddhya Kay Karte movie, Abhinay Berde second movie is Ashi Hi Aashiqui - AHA.  According to the MarathiCineYug.com's Post, Sachin Pilgaonkar, the Legend of Marathi Film Cinema with 7 Stars AllRounder as an Actor, Singer, Dancer, Producer, Director, Story Writer and Television Host - Mahaguru has announced on 17 August 2017 on the occasion of his Birthday that he turned to 60 years "Young".

The movie Ashi HI Aashiqui - AHA is produced by his wife and the legend Marathi Actress Supriya Pilgaonkar, Joe Rajan, and Vajir Singh.  This film has back to Sachin Pilgaonkar to direction after Four Years gap.

The whole film industry is knowing the friendship of Sachin Pilgaonkar and Laxmikant Berde.  Lakshya and Sachin, both worked together in many super duper hit Marathi movies such as Ashi HI Banva Na Banavi, Aayatya Gharat Gharoba and there are many movies for which Sachin has directed Lakshya in many Marathi films.

Now, Sachin has directed Lakshya's son Abhinay Berde, which is his second movie after Ti Saddhya Kay Karte, released in 2017.

* This website is made by Fans Team Members. (NOT Endorsed By Actor Abhinay Berde).