Abhinay Berde is a promising ,versatile actor of Marathi Film Industry. He has made his best debut entrance in Marathi Industry with Film Ti Saddhya Kay Karte released on 6th January 2017 in which he won ,”The best Male Debut “Award. 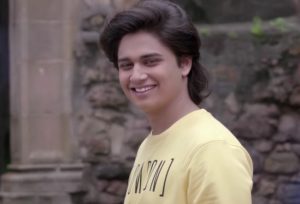 Abhinay Berde was born on 3 November 1997 at Mumbai. He is the son of Late Laxmikant Berde and Priya Berde. Both were well known actors of Marathi and Bollywood Movies. Laxmikant Berde was famous for his acting skills and was a popular Comedian until his death.Some of his Marathi films include De Dana Dan(1985), Dhoom Dhadaka(1984), Aamhi Doghe Raja Rani, Ek Pareekshak, Zapatlela,etc. Some of his Hindi films include Aarzoo, Saajan, Beta, 100 Days. Hum aapke hain kaun, etc. Priya Berde was also talented actress and had many hindi films.

Abhinay has done his schooling from Sinhagad Springdale Residential Public school along with his sister Swanandi Berde. He is currently a final year student, pursuing BA Economics, at Mithibai College.


Abhinay like to spend his time in Reading, watching movies and gaming. His favourite spots include Mumbai, Goa, and Shimla. His favorite actors are Shahrukh Khan, Laxmikant Berde ,Robin Williams And Kamal Hassan. His favourite actresses are Madhubala, Madhuri Dixit,Sridevi,Alia Bhatt, Priyanka Chopra and Kangana Ranaut. His Favourite colours are black, white and Blue.His aim before being an actor was to serve nation and be an army man. He had a great memorable experience when he faced camera for the first time.

His first film was Ti Sadhya Kay Karte,directed by Satish Rajwade,Produced by Arwind jog, Pallavi Rajwade,Nikhil Sane, and umesh Shinde, with sweet and melodious heart touching songs. The story was outstanding and his role as Anurag touched many hearts, made it more successful. The movie picturised teenager love,friendship, struggling, drifting apart, and happiness, and finally meeting the two hearts, everything in a mesmerizing way. It was his best entry in the industry.

There is a rumors that third movie of Abhinay Berde will be lead actor in the directorial of Sanjay Jadhav.  But yet official announcement not available anywhere.

After the debut appearance Of Ti Saddhya Kay Karte, Abhinay Berde second Movie is Ashi Hi Aashiqui released in 2018. The film is directed by the Legend Marathi Actress Supriya Pilgaonkar, Wife of Sachin Pilgaonkar, The legend of Marathi Film Industry who has 7 stars as allrounder namely Actor, Director, Dancer, Producer,Singer, Story writer and Television Host.Joe Rajan and Vajir Singh also joined Supriya Pilgaonkar in the direction of the film. Sachin Pilgaonkar is the music director of the film and for the first time in the Marathi Film Industry. He is back in the Film Direction after a break of 4 years. The second movie of Abhinay Berde', Ashi Hi Aashiqui is a teenage Love story in which he is playing the leading role. The entire songs will be sung by everchanging melodious voice of Sonu Nigam. Expecting the film to be the best Romantic Drama with great performance of Abhinay Berde.


His message to his fans to keep loving and will make great performances with extraordinary projects.He is a promising actor and will be a part of many projects in future.