If you are looking for upcoming marathi movies, then there are many marathi films are scheduled to release 2018 year.  Abhinay Berde's second marathi movie (after his debut film Ti Saddhya Kay Karte) is also release this year 2018 which is directed by the great Mahaguru - Sachin Pilgaonkar.

There are other marathi movies also ready and going to release in 2018, 2019 year.
In last 3 decades, we have seen that there are very few and successful producers, directors in marathi film industry such as Mahesh Kothare, Sachin Pilgaonkar, Ravi Jadhav, Sanjay Jadhav, Nagraj Manjule.

Every year, those directors are always come up with new marathi film stories for the film lovers, along with new actors, fresh face in marathi cinema.   According to MarathiBoxOffice.com news, we can expect new marathi cinema of Abhinay Berde.  In that marathi movie, he will be the HERO in the direction of Sanjay Jadhav.   The upcoming marathi name can be available on Wikipedia very soon, which will release upcoming period. 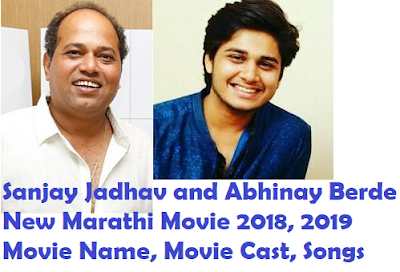 If you remember the director name of few Top released marathi movies such as DuniyaDaari, Pyar Wali Love Story, Tu HI Re and Ye Re Ye Re Paisa, then you find a common director in all those movies.  All those movies are released by Director Sanjay Jadhav.

Sanjay Jadhav is one of the famous, successful director in marathi film industry, whose films are releases on record break, blockbuster.

We can provide further information about this movie which is directed by Sanjay Jadhav and actor Abhinay Berde.  We'll also update all the details along with movie name, movie story, other cast of this movie.