10 Things You Must Know About Akash Thosar vs Abhinay Berde

Today, in Marathi Cinema, we have few fresh faces and young actors whose films are released in last two years time, but those fresh actors are still being famous among their fans and awaiting for their upcoming movies.

We're going to talk about two Freshers, but established Young actors of Marathi cinema.  Those two are come from different backgrounds.  We are simply comparing over to over with both of them.  Those two actors are nothing but our famous chocolate boy "Abhinay Berde" and Sairat fame "Akash Thosar".

Yes, we're simply comparing both of them, Akash and Abhinay about their first films, upcoming movies, social activities, and craze among their fans. 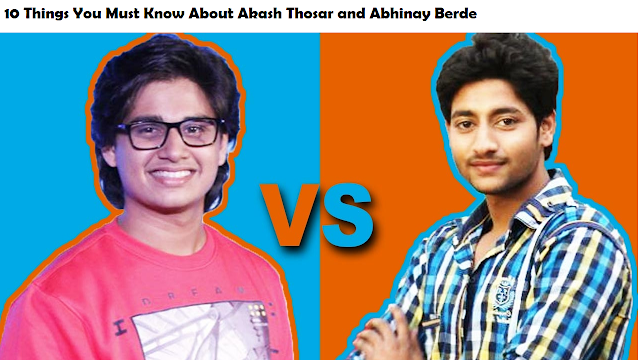 10 Things You Must Know About Actor Akash Thosar

1] Akash was very fresher, common man to marathi cinema until his debut blockbuster Sairat released in April 2016.  After released of Sairat, Akash become Super Star in a Night!

2] Akash do not have or belongs to any filmy background or relatives or sponsored by any one.  Akash stood up and established his place in marathi film industry himself with the help and guidance of  Producer, Director of Sairat Nagraj Manjule.

3] According to Sairatchya Navane Changbhale (Making of Sairat), Nagraj Manjule's brother found Akash Thosar when he was busy in some sporting activity of wrestling near Jenur station and he (Nagraj's Brother) immediately send photo of Akash Thosar to Nagraj Manjule and What, Nagraj Manjule invite Akash for audition.  That's how Akash become HERO of Sairaaaattt.

4] Akash got full training from Nagraj Manjule regarding acting and important scenes which he acted in film Sairat.  You can watch Sairatchya Navane Changbhale which is making of Sairat.

5] Akash Thosar is Born on 24 February 1993 and he has completed Masters in Arts from Pune University. Height of Akash is 5.7 inch.

7] Akash lose about 13 kilos weight to make him suitable for the role in debut film Sairat.

8] Akash become super star after release of film Sairat which is the top earning movie in marathi film history as of Rs 110 Crores collection.

10 Things You Must Know About Actor Abhinay Berde

1] Abhinay Berde was very fresher, but Star-kid before his first film release in January 2017.  After released of Ti Saddhya Kay Karte, debut film of Abhinay, he become very famous among fans.

2] Abhinay belongs and have filmy background as we all know he is son of the great comedy king Late Laxmikant Berde and Priya Berde.  His sister is also entered in marathi movies and her debut film is Respect.

3] Abhinay has filmy background and this doesnot mean he will understand all the things automatically.  Abhinay also have had struggled to reach at this reputation to show off his skills.  He also need to acquire many things when he is performing as an Actor.

4] We can say, Abhinay have got some talent by Born from his parents as they were superstar of marathi film industry in last two decades.

5]  Date of Birth of Abhinay Berde is 03 November 1997 and Abhinay has completed his graduation from Mithibai College, Mumbai.

6] Abhinay Berde's second movie is Ashi Hi Aashiqui which is release in 2018 and is directed by Sachin Pilgaonkar.

7] Abhinay Berde's loves his hairs and he takes care of his hairs differently to make them silky, stylish.

8] Abhinay Berde role in Ti Saddhya Kay Karte is nothing but as Young Anurag which is of Ankush Chaudhari.

Let us know, who is your favorite hero - Akash or Abhinay and Why ?
Editor Staff May 17, 2018 Comment

10 Things You Must Know About Akash Thosar vs Abhinay Berde
4/ 5
Oleh Editor Staff
Prev Next Home
Subscribe to: Post Comments (Atom)
* This website is made by Fans Team Members. (NOT Endorsed By Actor Abhinay Berde).