So far, there are three movies in name of Abhinay Berde.  Upcoming marathi movie list of Abhinay Berde will be available soon after the release date and official announcement by Director, Producer. 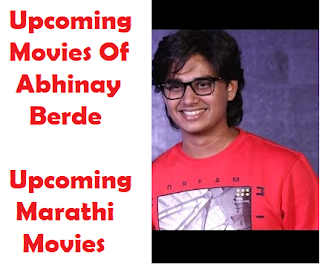 This first movie of Abhinay Berde had succeed on box office with the collection of more than 25 crores in just 20 days.   Abhinay also won the Best Male Debut Award for the this movie.

Some Important Statistics of the First Movie of Abhinay Berde is given below including movie budget, musical director, main director, producer, actors, actress name, production company and other data is given below.

The above data is take from Wikipedia website's Ti Saddhya Kay Karte.

Produced By: Supriya Pilgaonkar and Joe Rajan, and Vajir Singh

Third Movie of Abhinay Berde in Direction of Sanjay Jadhav?

The name of third movie yet not declared.  The upcoming movies list of Abhinay Berde will be available soon which will be release in 2018, 2019,2020 years.

You can download the MP3 songs of Abhinay's first and second movie which are released recently.  The songs of Ti Saddhya Kay Karte are popular among the song lovers.  You can find video songs on YouTube and also download Mp3 songs online or through mobile apps.

If you know the name of Abhinay Berde upcoming movies, then please comment below, so that we will post the details article about the new movies of Abhinay.
Editor Staff May 18, 2018 Comment